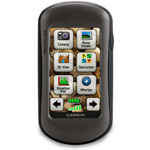 The Garmin Oregon is a hand-held GPSr featuring large internal memory, and a Touch Screen interface.

There are numerous models in the Oregon range, namely:

Most Oregon devices have similar features, making it difficult to choose the right device to purchase, although the newer generation 6xx devices have significantly larger capacities for paperless caching data (millions of geocache listings).

This line of GPSr are all discontinued now, but can still be found at various places online.

A comparison chart can be found here