Difference between revisions of "ROT 13" 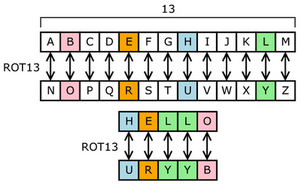 
ROT13 ("ROTate by 13 places", sometimes hyphenated ROT-13, or lowercase rot13) is a simple Caesar cipher used for obscuring text by replacing each letter with the letter thirteen places down the alphabet. A becomes N, B becomes O and so on. The algorithm is used in online forums as a means of hiding joke punchlines, puzzle solutions, movie and story spoilers, and offensive materials from the casual glance.

This is the method used to encrypt Cache Hints. It makes it fairly easy to decrypt as needed with pen and paper when out in the field, but doesn't spoil the fun of the search for those who chose not to use them.